AccueilTarzan and Jane around the world 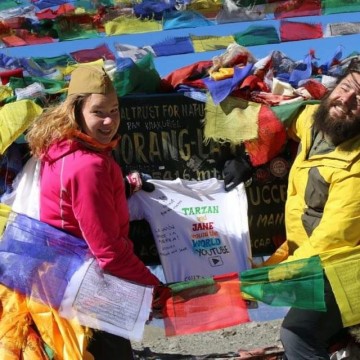 Tarzan and Jane around the world

3 Full time travellers / Floggers
Hey, you. Yeah, you. The one discreetly clicking on this article at work while your boss sits inches away. We know your secret: You're itching to drop everything and book a one-way ticket across the world.

Weâ€™ll be the first to admit gorgeous travel bloggers Eve, 24, and Alex, 32, who met in Austria and have been involved in a jet-setting romance ever since, are tough to emulate.

They felt a connection from day one which was further strengthened when Alex told Eve about his dream to travel the world by hitchhiking.

No dream is ever chased alone.
Eve, a babysitter, and Alex who sold coffee on the street to earn his bread, worked extraordinarily hard to get started.

Several sleepless nights later, Alex and Eve quit their jobs after saying their vows and have traveled to 17 countries together before their first wedding anniversary. They're living their dream.